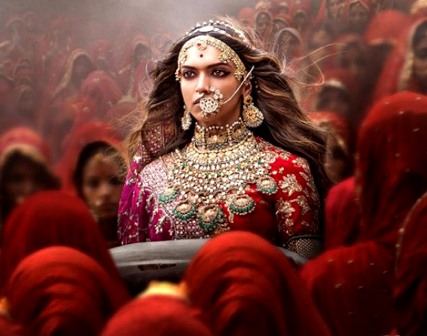 Padmaavat - All Movie Song Lyrics & Videos from Bollywood Movies 2018: Padmaavat film is an Indian epic period drama film directed & produced by Sanjay Leela Bhansali with Viacom 18 Motion Pictures. The film starring Deepika Padukone in the title role as Rani Padmavati, alongside Shahid Kapoor as Maharawal Ratan Singh (Husband of Rani Padmavati) and Ranveer Singh as Sultan Alauddin Khilji, with Aditi Rao Hydari and Jim Sarbh in supporting roles.
The movie story Based on the epic poem Padmavat (1540) by Malik Muhammad Jayasi, the film narrates the story of Padmavati, a legendary Rajput queen. Padmaavat Movie Release date - Initially scheduled for 1 December 2017, the film's release has been delayed indefinitely because of numerous controversies. As of 3 December 2017, It is pending approval by Central Board of Film Certification. On 8 December 2017, it was revealed that the film is tentatively scheduled for international release on 9 February 2018 in the United States and Canada, but no in India.


Padmaavat film music of songs composed by Sanjay Leela Bhansali, while film score is composed by Sanchit Balhara. A. M. Turaz and Siddharth-Garima wrote the lyrics. Shreya Ghoshal performs four of its songs. Songs are based on Hindi and Traditional Rajasthani Folk songs.